His first MMA fight was at the age of 22 years old, still in 2002. Leo was invited to replace his friend Vitor Shaolin in a fight in Japan. However, Leo had only 20 days to be ready.

“I went to train and got caught like a dog for 15 days”, jokes the extrovert Leo. "At the end of the first day of training, I was stretched out looking at the ceiling thinking 'what am I doing with my life?'".

He debuted against none other than Takanori Gomi, former Pride champion, the “Fireball Kid”, at Shooto - Treasure Hunt 7.

Takanori already had 10 expressive victories and sometime later he consolidated himself as the greatest Japanese lightweight in MMA, winning the title of Pride lightweight champion and later going through the UFC. Unfortunately, Leo did not make his debut with victory.

“I did three rounds with him and I was defeated, but I saw that I had the heart to fight anyone, it was just a matter of training”, says Leo Santos.

THE DEFINITIVE TRANSITION TO MMA

The transition from Jiu-jitsu to MMA, however, would only come definitively in 2006. After leaving MMA to live his peak in Jiu-jitsu and winning his seven world titles, Léo Santos sought a new challenge in MMA.

“I left Jiu-jitsu because I was a very accomplished guy in the sport. MMA is a new, challenging thing, and I embraced it. I had a very serious injury that made me think about stopping, but faith in God. Plus that thing about the Brazilian never giving up ”, says the fighter.

His brother Wagnney and his coach Dedé Pederneiras encouraged Leo in this decision. Throughout his career, he went through several events such as Sengoku / Shooto, Cage Warriors, Shooto Brasil, MTL, and SCI.

“I was thinking about stopping, I was already taking a helicopter pilot course. In addition to having a very serious neck injury, I was not even able to carry my son right on my lap, when TUF appeared [...] ”shares Léo Santos.

At TUF Brasil, Leo Santos arrived as one of the favorites and ended up going to the final with the help of destiny. In the first fight, he got the spot at home because rival Luciano Contini broke his finger trying to defend a fall. At home, he dominated the fights against Luciano Ninja and Thiago Marreta. In the semifinal, he was defeated by Argentine Santiago Ponzinibbio, but won the title chance thanks to an injury from his rival.

Despite the defeat, Leo showed in the fight against Santiago that he could aspire to big steps in the UFC. As a star in Jiu-jitsu, the carioca exchanged all the time with the Argentine and starred in one of the best fights of the program's edition. Leo lost by a tight decision. However, an injury took Santiago out of the final, and Léo Santos debuted in his place to face William Macario.

In the final of TUF Brasil 2, at UFC on Fuel TV: Nogueira vs. Werdum, Leo faced Macario, after losing the first round, Leo managed to fit an arm triangle, making Macario give up the fight and with that, Léo became the winner of TUF Brasil 2, winning a contract with the UFC. 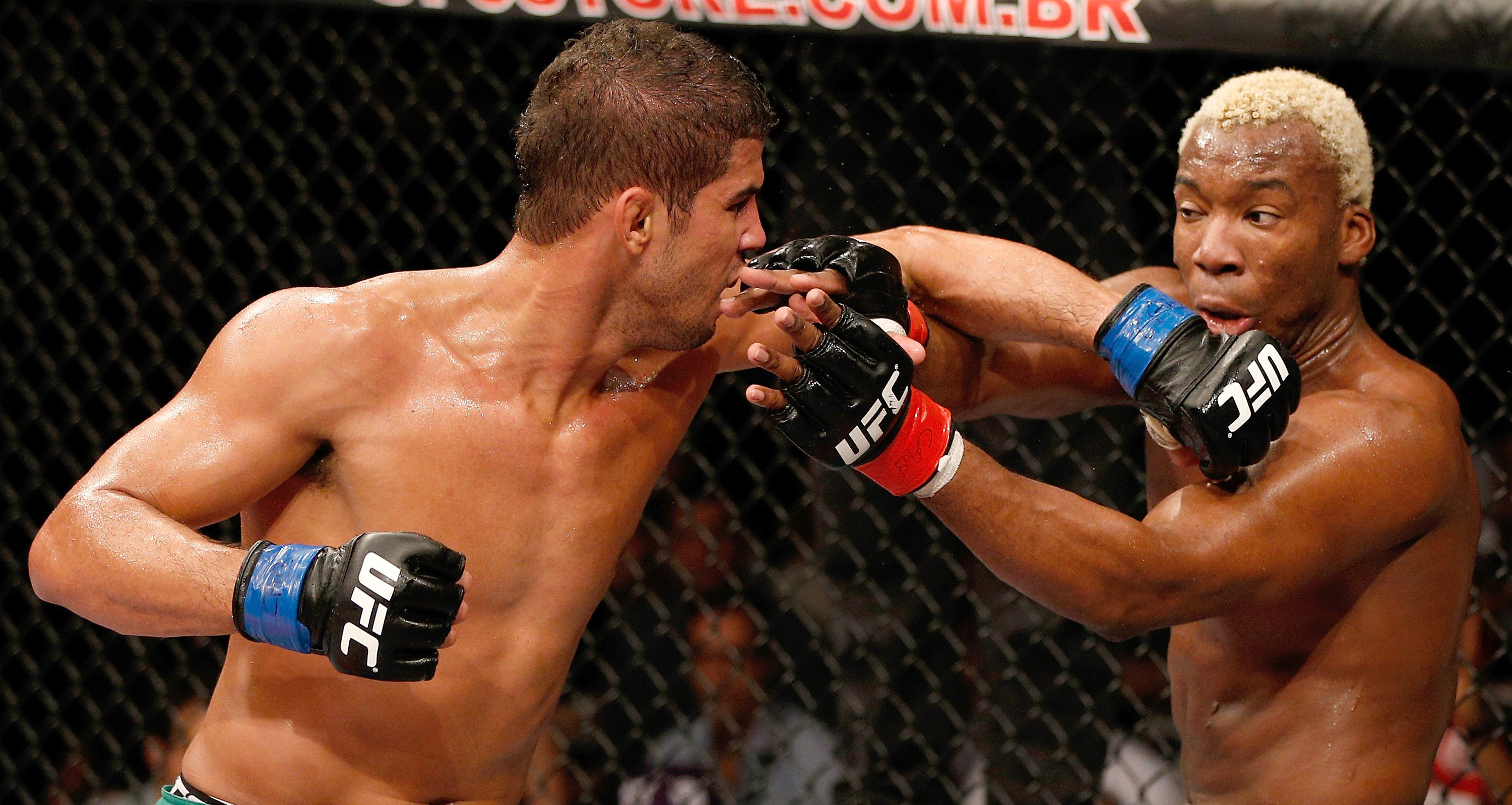 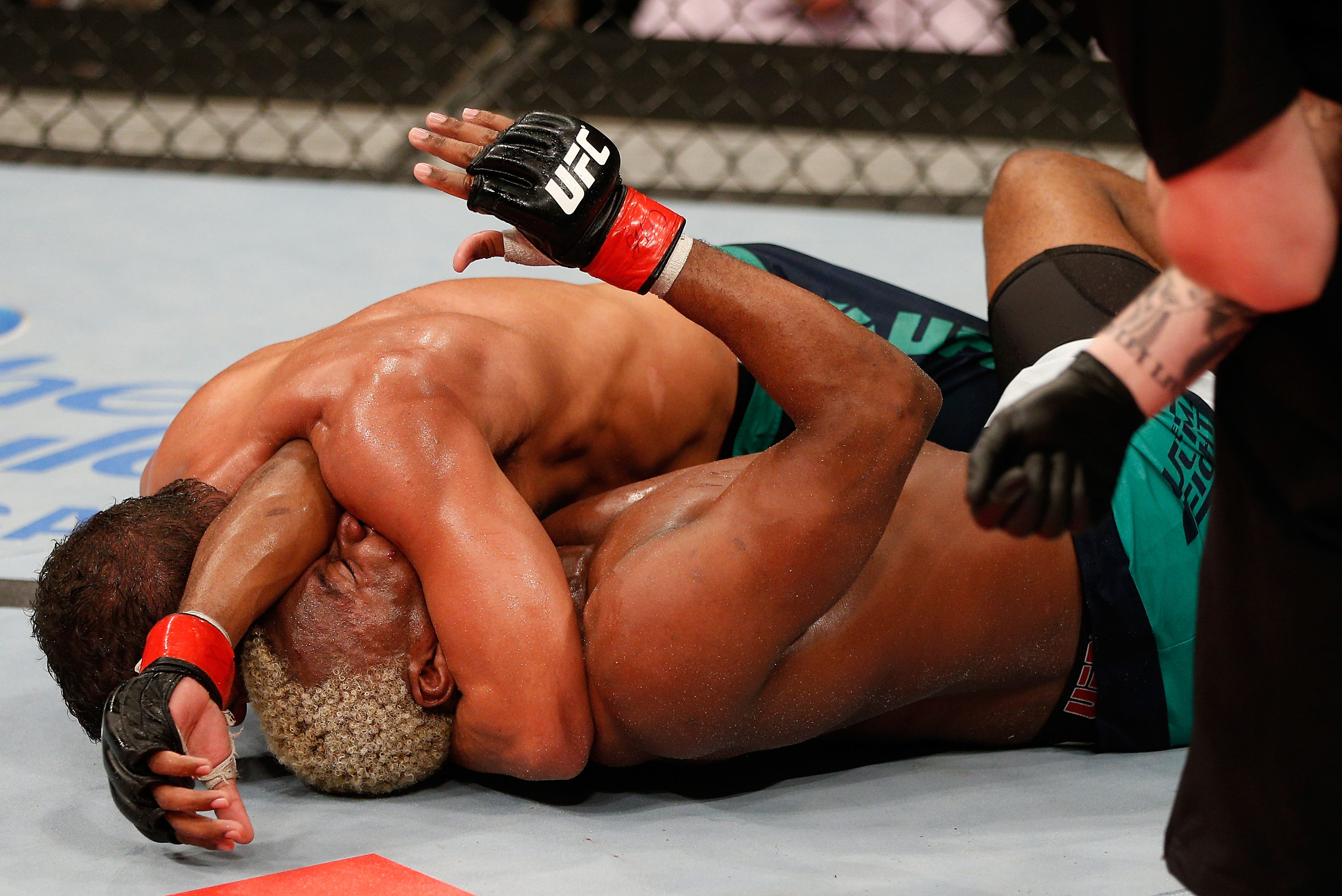 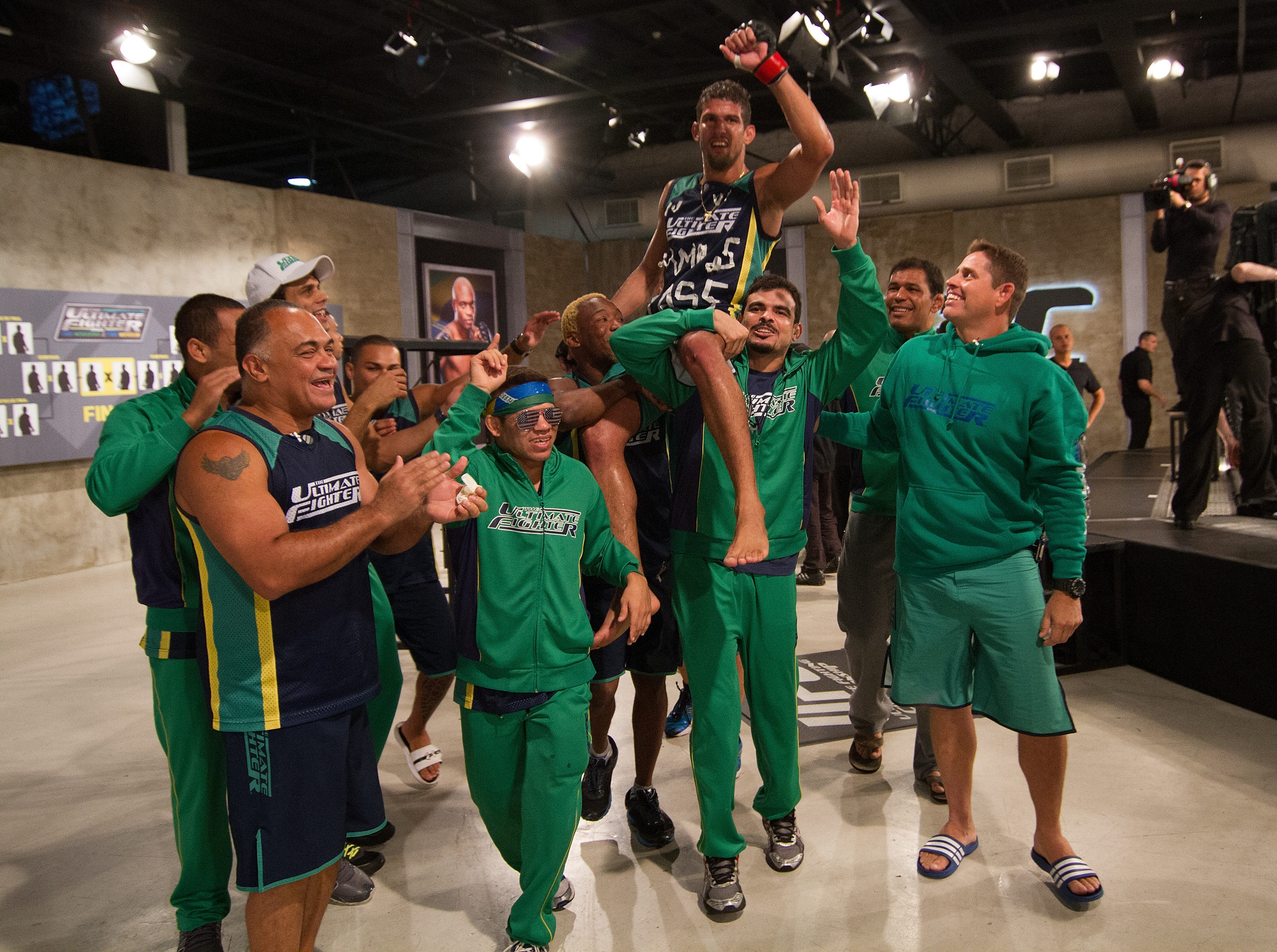 “It is a unique and very crazy experience […]”

“It is a unique and very crazy experience because you enter with a dream, and when you get there you cannot listen to music, you cannot watch television, you cannot talk to your family members, and I was with my son, who should have been one year old. I just thought about him, about my family, so I was really down with it, feeling homesick. There were moments of TUF that I said, my brother, this is not worth it, no.

What counts is my family. In addition, you start to value small things. ” 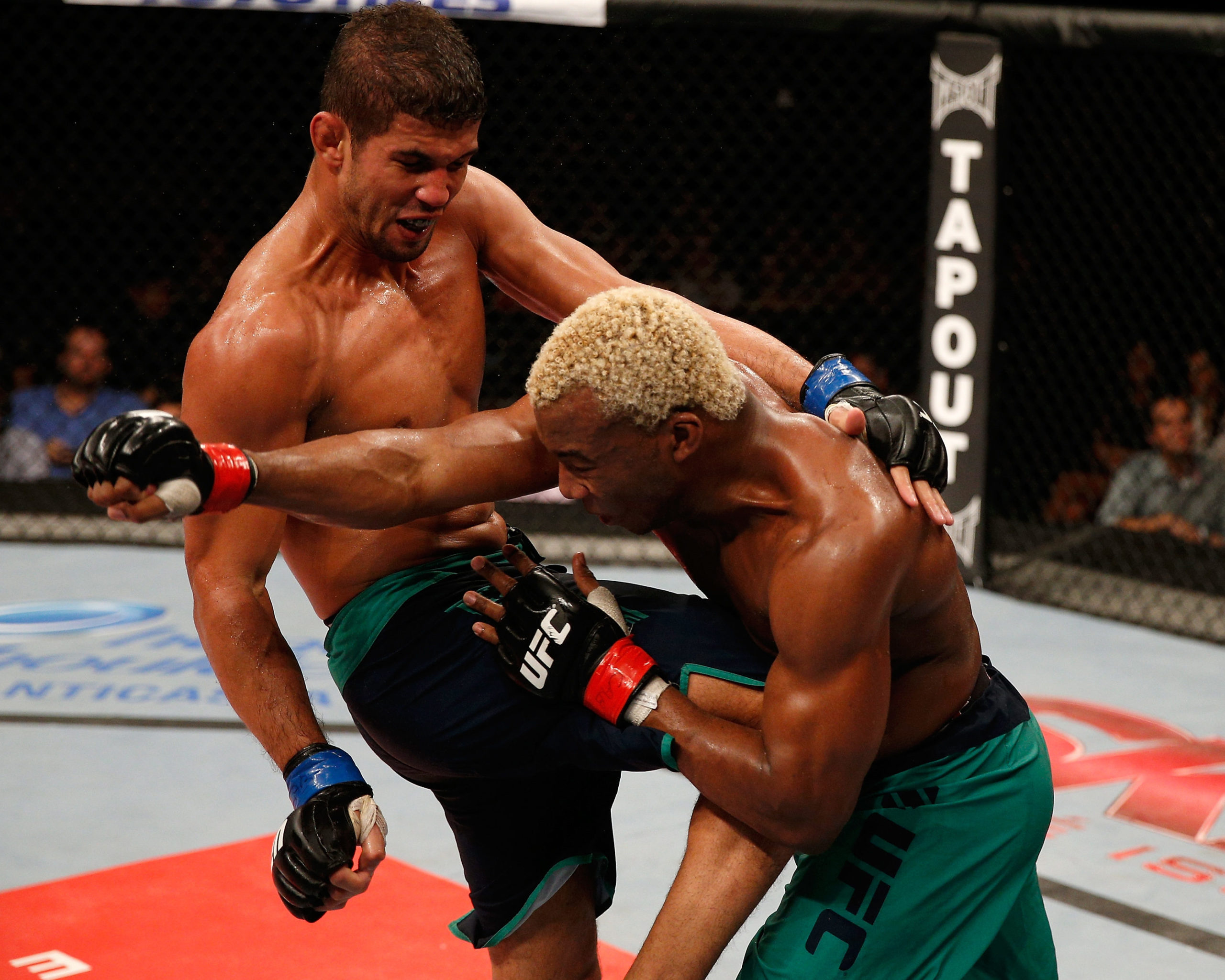 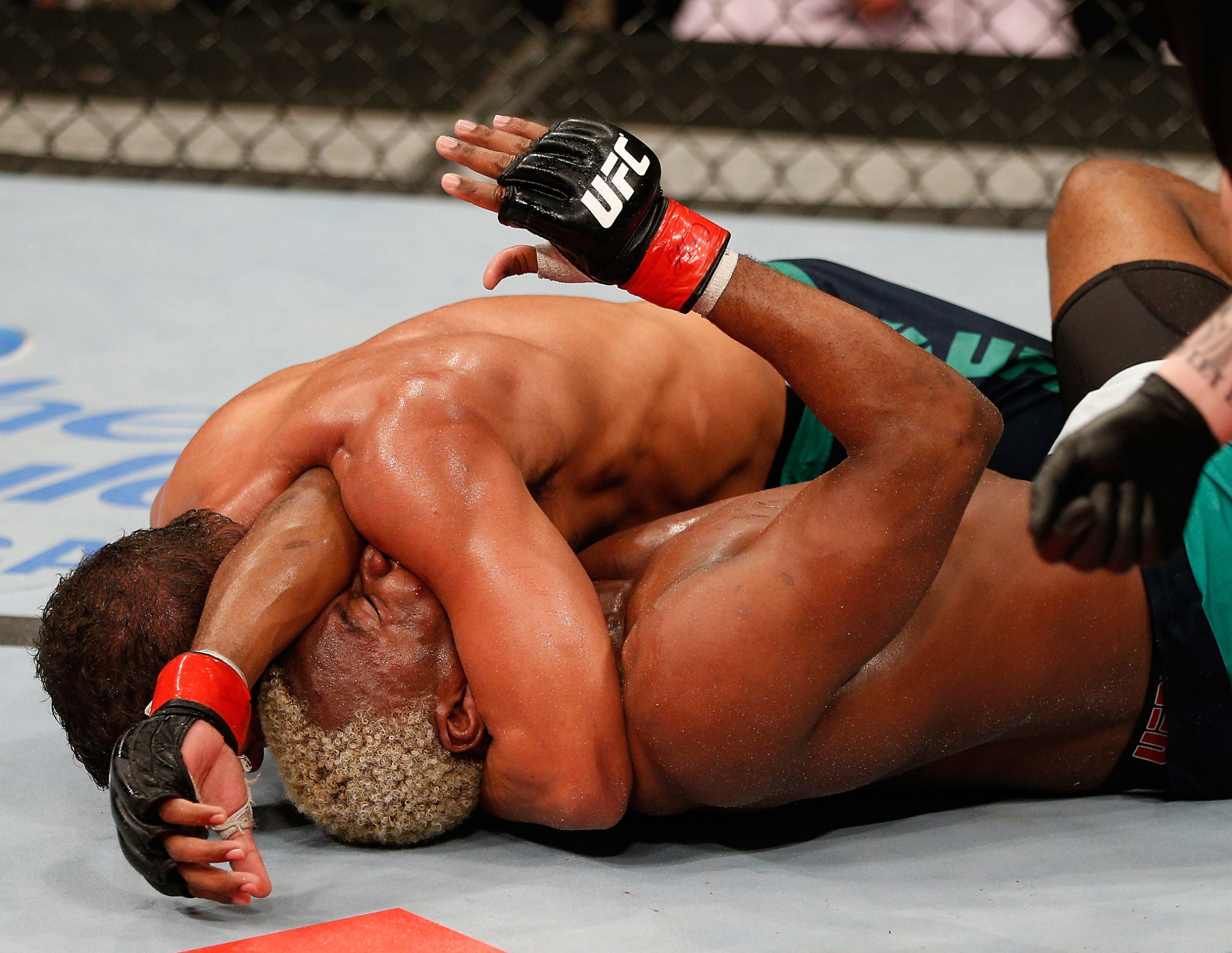 On March 23rd, 2014, Léo Santos made his UFC first match against Norma Parke, in Natal. The premiere fight as a lightweight in the organization was lukewarm, with little action, which was sparked by Norman Parke's clinch game. The North Irish tied the fight all the time, but, punished with the loss of a point in the second round for holding Léo Santos' shorts, ended with a majority draw (29-27 Leo Santos and double 28-28). This was the first draw for both athletes' careers. 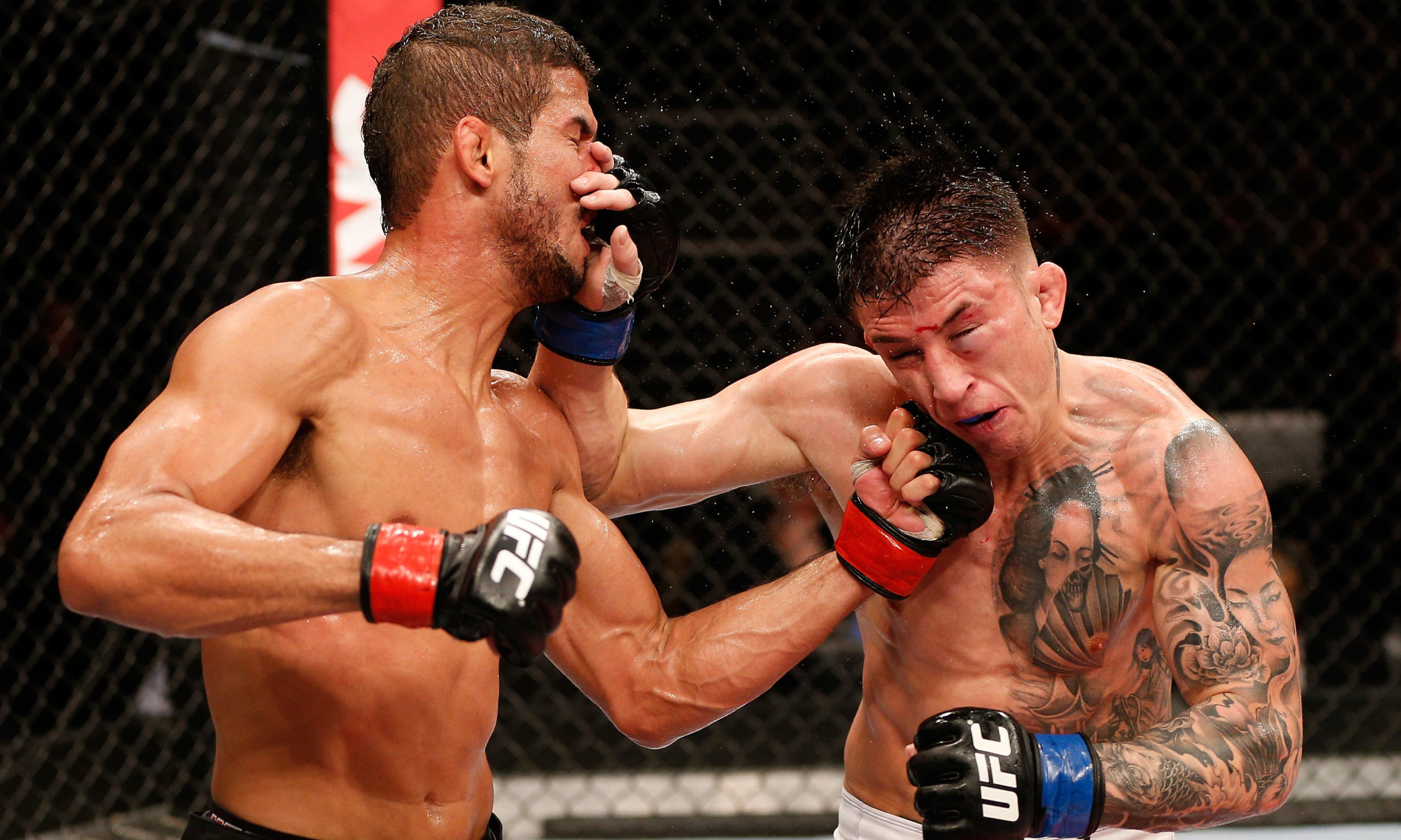 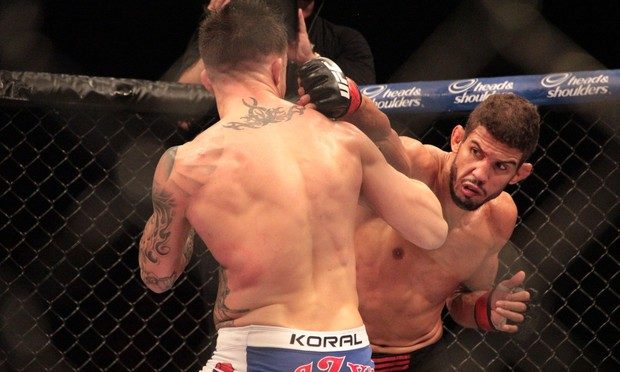 After his first match, Leo achieved a sequence of four significant victories in his presentations, which started by beating Efrain Escudero at UFC Fight Night 51: Bigfoot vs Arlovski 2, by unanimous decision. Then he passed Anthony Rocco Martin, at UFC Fight Night 62: Maia vs. LaFlare, by submission, and what is considered one of the most significant victories of his career, against the American Kevin Lee. 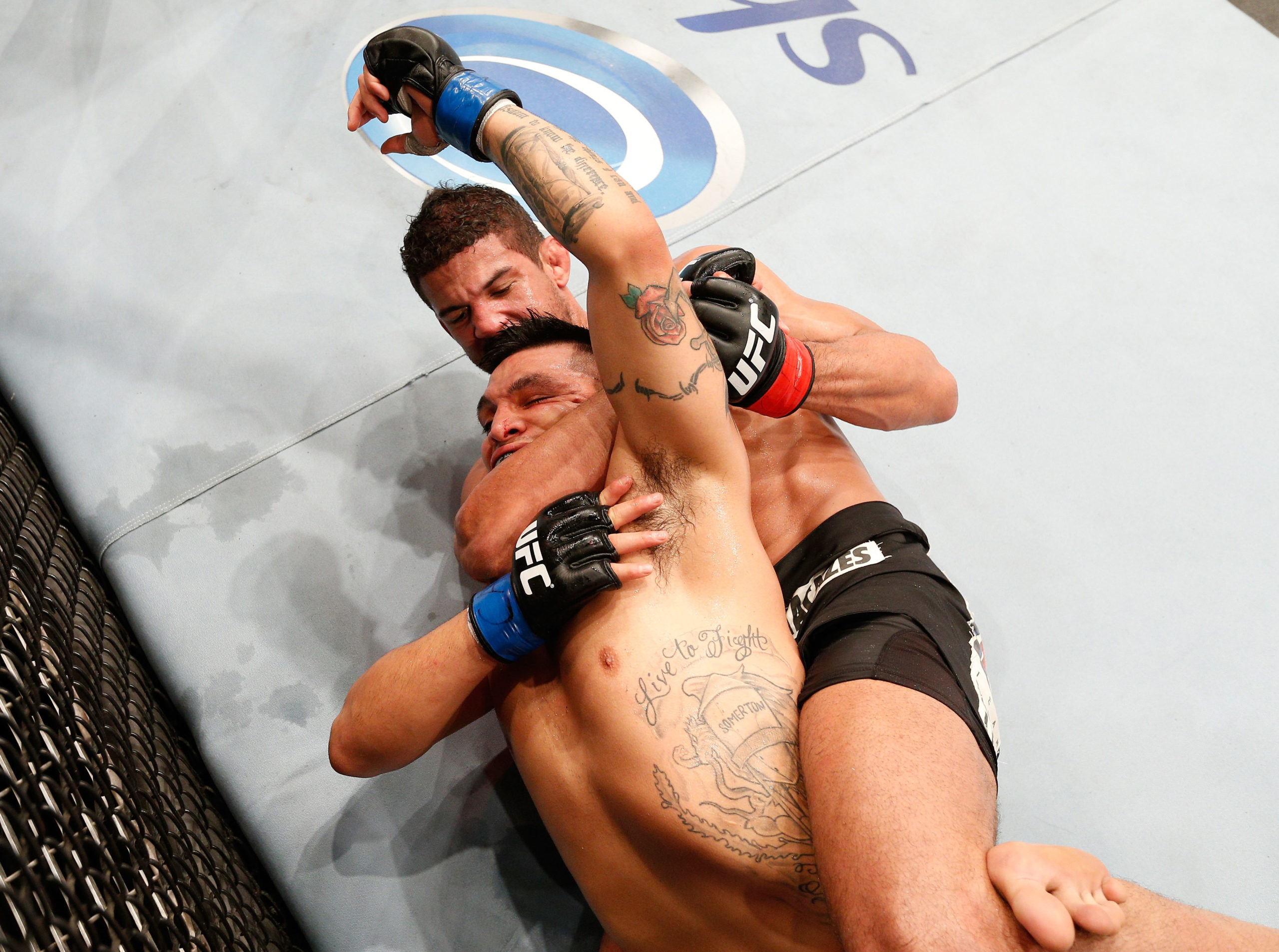 The knockout in the first round ended 10 years of invincibility of the first featherweight of Ultimate, and guaranteed Leo Santos a bonus of “Performance of the Night”, The impressive victory over “Motown Phenom” made noise in the division.

After the fight against Kevin Lee, Leo had a fight against Evan Dunham postponed and later canceled due to injury. Then he faced Adriano Martins, at UFC 204: Bisping vs. Henderson 2, in October 2016, and won by split decision. Since then, Leo even had a scheduled confrontation with Olivier Aubin-Mercier at UFC Rio 8, but was canceled due to an opponent's injury.

Leo Santos knocked out Scot Stevie Ray (22V 8D), with six UFC wins and three defeats. The 29 years old fighter came from a victory against Jessin Ayari in October 2018, but had previously lost to Kajan Johnson and Paul Felder.

Leo showed that he also has heavy hands. After 32 months away from the Octagon, Léo Santos returned in style and hit a strong right from the right in the face of the Scotsman, who has already been knocked out. With this knockout,was the fifth consecutive victory of “Lamparão”, who still doesn't know what it's like to lose in the Octagon.

“It was like the Octagon was too small to contain my excitement and everything I felt after the knockout, so I started running to thank God and celebrate. I was out of the country for three years and it was great to be back that way. Now I want to stay active. More fights, more victories”, said the excited Leo in his interview to the event. 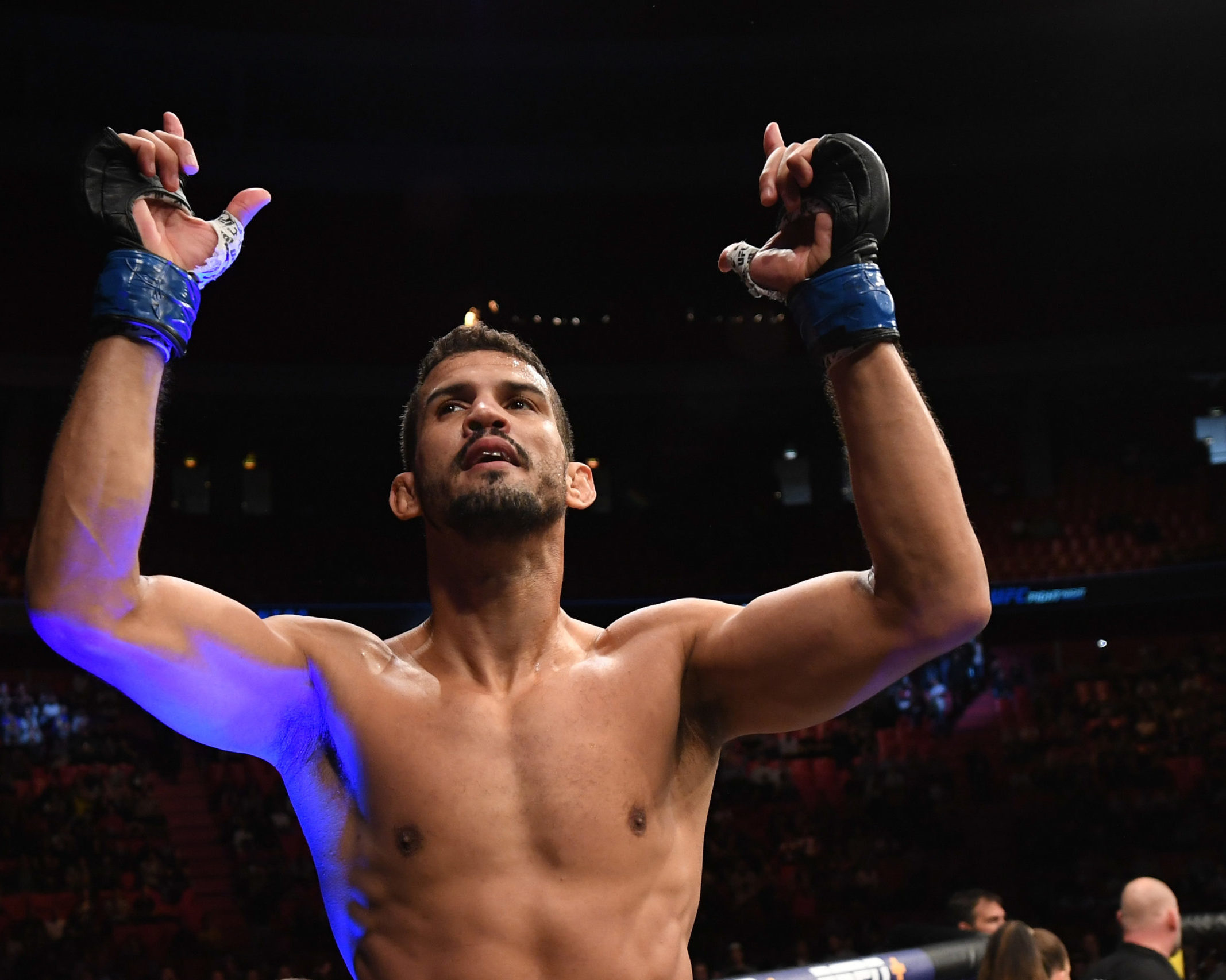 Leo won another victory against Russian Roman Bogatov by unanimous decision. The fight was very troubled and had a finger in the eye, three low strokes applied (two knees on the genitals and one knee on the head while Leo was with the three supports on the floor), in the end, everything went well! 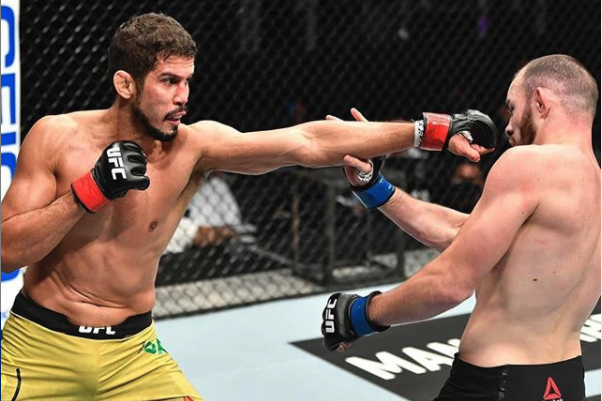 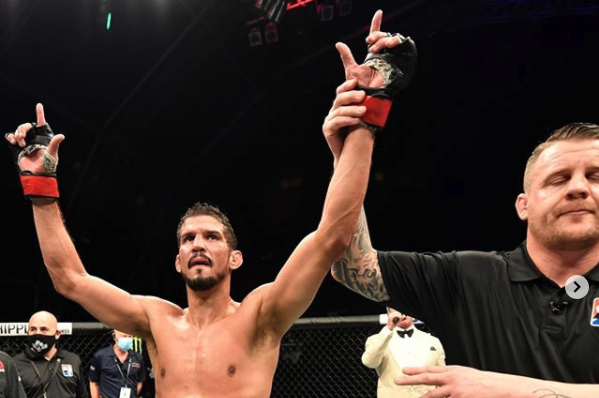 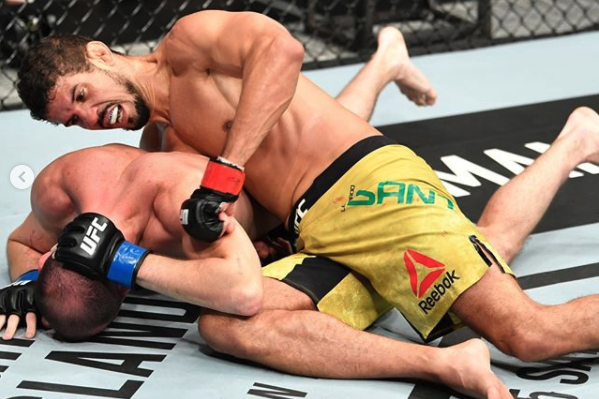 Unfortunately, it didn't work for our Leo. But, it was just a hitch in his career. Let's go! Read Leo's post after this fight by clicking on the button 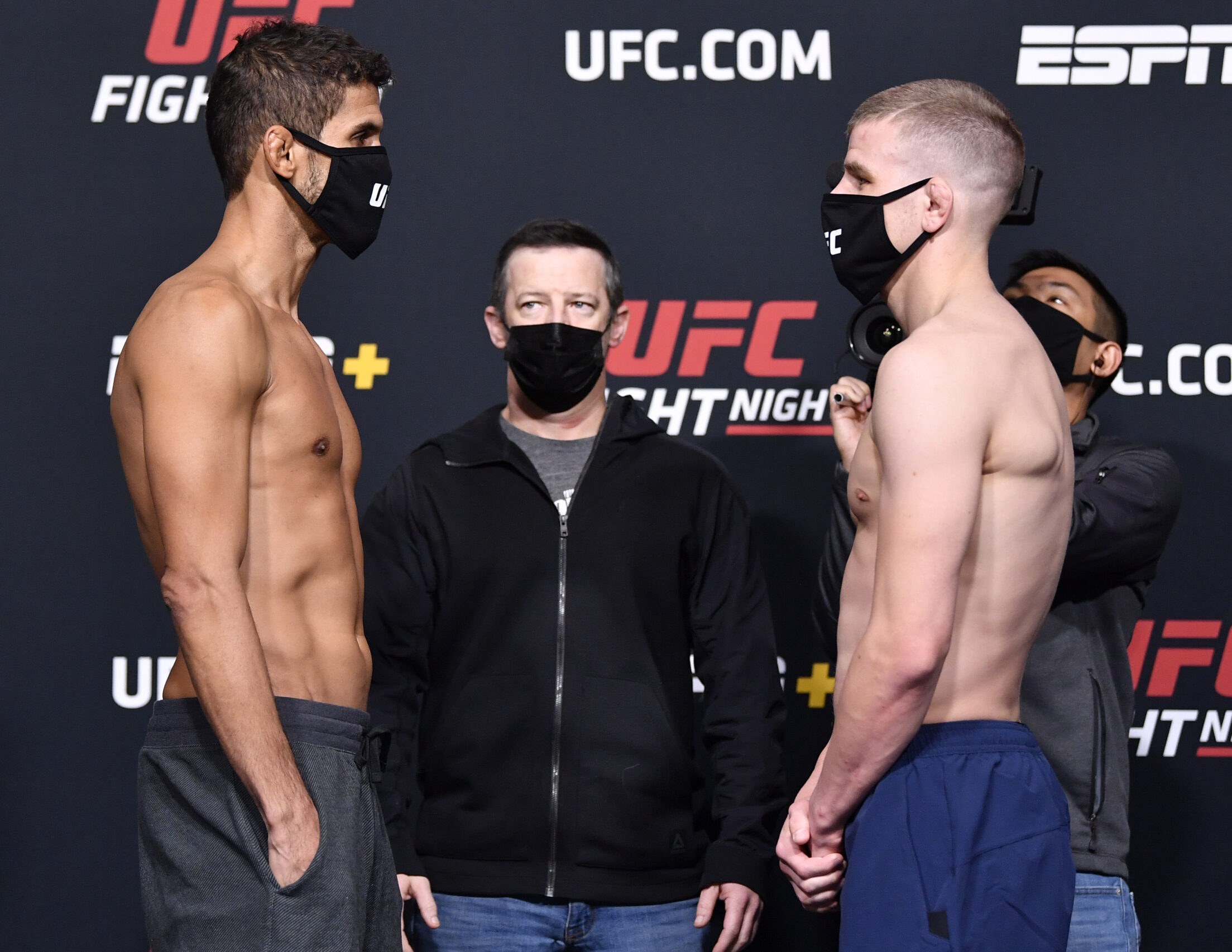